About us
Airport Profile News Center 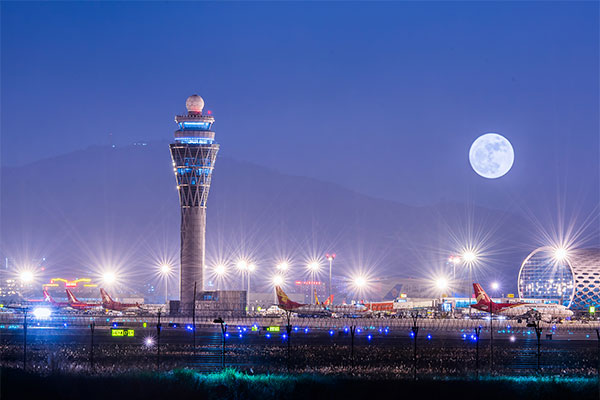 Shenzhen Bao’an International Airport is located on the east bank of the Pearl River. The airport is 32 kilometers away from the downtown. It is a modern large-scale international airport that integrates sea, land, air, and rail transport in China.


Shenzhen Bao’an International Airport opened in October 1991. Since then, the number of both passenger and cargo traffic has maintained rapid growth.In 2003, its annual passenger throughput


Shenzhen Bao’an International Airport has advanced facilities. At present, the total airfield is 7,700,000 square meters, the terminal building is 451,000 square meters, and the cargo facility is 1,660,000 square meters. Terminal 3, which integrates architectural aesthetics, green energy conservation, and functional utility elements, was officially opened in November 2013. This terminal building is divided into three parts: the main terminal building, the cross concourse departure hall, and the satellite concourse. The building covers a land area of 195,000 square meters, with a length of 1,128 meters from north to south, a width of 640 meters from east to west, and a total floor area of 451,000 square meters. It provides 62 bridge stands and 14 remote stands that are close to the terminal. The terminal can handle 45 million annual passengers. The airport currently has two runways. The second runway, with a length of 3,800 meters and a width of 60 meters, was officially put into operation in 2011. This CAT 4F runway can accommodate the largest passenger aircrafts in the world, including the "giant" Airbus A380.


The "13th Five-Year Plan" outlined and positioned Shenzhen Airport as an international aviation hub. Located in the Pearl River Delta, Shenzhen Bao’an Airport is situated among several world-class cities and takes advantage of being in the "special zone, bay area, and pilot free trade zone" of Shenzhen. The airport insist on assisting Shenzhen development, developing passenger and cargo traffic simultaneously, and establishing an efficient “sea, land, air, and railway transport” system. The airport is committed to establishing a route network that facing the Asia-pacific and connecting Europe and America, which develops itself into an essential airport in the Pearl River Delta world-class airport cluster and strengthens its connectivity as an important international aviation hub integrating into the "Belt and Road" strategic initiative.

We are glad to receive your feedback!

Thank You For Providing Feedback!

We truly appreciate your time and effort to help us serve you better.